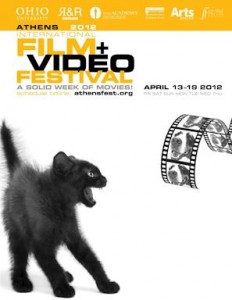 The 39th edition of the Athens International Film and Video Festival opened on Friday, April 13, with more than 250 films from around the world. The Festival was founded in 1974. This year a record 1,049 entries were received in the festival’s Competition. Of these, around 200 were chosen to screen at the festival. The Festival is sponsored by the Athens Center for Film and Video, a project of the College of Fine Arts at Ohio University.

“This year’s selections are really the cream of the crop,” Festival Director Ruth Bradley said in a news release. “We simply don’t have time to screen all the really solid films. It gets down to how the chosen films fit together to make one cohesive program. The films make it into the festival represent not only really excellent films, but films that work together to make thematic strands that run throughout Festival week.”

One of those thematic strands is “”Let’s Talk About Water,” a series of films that engage with environmental concerns, especially about the issue of clean water. Programmed by Linda Lilienfeld, a guest curator with a long career in programming environmental films, this special program was underwritten by the prestigious Academy of Motion Pictures Arts and Sciences, through its Film Festival Grants program.

Sunday, April 15, through Thursday, April 19, the “Let’s Talk About Water” program will screen at 5 p.m. Among the films in the “water” program are “Peace Out,” a film that asks the question “are we ripping out our back yard for energy – or not?”; “Silent Snow,” a study about the accumulation of pollutants in the Arctic; “As Above, So Below,” an introspective piece about the cycles of life; and “78 Days,” a spirited portrait of the workers who replant forests in northern Canada.

Several of the filmmakers with “water” films will be in attendance and will participate in a post-screening discussion moderated by Lilienfeld, who has led two earlier film programs at the Athena Cinema about environmental films. Because of the support from the Academy for Motion Pictures Arts and Sciences, and the “Arts for Ohio” program, admission to “Let’s Talk About Water” is free.
[excerpted from The Athens News, April 11, 2012 — read full article]