World Water Week is hosted and organised by the Stockholm International Water Institute (SIWI) and takes place each year in Stockholm. The World Water Week has been the annual focal point for the globe’s water issues since 1991.
[Learn more about Water Week || View the Water Week Programme]

Bravo and thank you to the Stockholm Water Week. Lights! Camera! Action! Let’s Talk About Water was a side event using films as a way to talk about water across disciplines, political divides, and scientific and technical specialties.

There is a “cognitive dissonance,” a gap, between what scientists, technocrats and politicians know about the water crisis and how journalists report it and public understanding. Water issues require another voice: the voices of many films that can visually, poetically and emotionally express water issues. Through these films a more general audience can be reached.

The Let’s Talk About Water side event was very well attended. Everyone introduced themselves and I, of course, told jokes! You have to make it fun! We showed short film samples from the Brown-Bag Lunch event (available at letstalkaboutwater.com) that was held in March 2013 by the Washington, DC office of the World Wildlife Fund. It had served to bring specialists together from various disciplines within World Wildlife Fund (WWF) US in an informal setting. Karin Krchnak, Director of the Freshwater Initiative at WWF US (www.worldwildlife.org) graciously reported to our audience, and tweeted!, that this event did in fact bring people together and effect policy! Wow! Dr. Richard Hooper, Executive Director of CUAHSI, (The Consortium of Universities for the Advancement of Hydrologic Science, Inc., www.cuahsi.org), a Let’s Talk About Water partner of 10 years, spoke specifically about the Scientific Visualization called Water in the Anthropocene (vimeo.com/anthropocene/water). This short film was produced by Global Water System Project (www.gwsp.org) and beautifully links large data sets about water and threats into a dramatically integrated one-world, 4 minute visual extravaganza. There is just enough time in the film for us to realize “water knits it all together,” upstream, downstream, north and south, green and blue! Many people stayed after the event for questions and answers. New friendships were formed and new projects are underway. We hosted a coffee and wine at 5:45pm which was a very big hit. We were especially pleased to see so many “young professionals” – a great new boon to our community!

We want to send a big thank you to the Stockholm Water Week Staff – everything was very well organized and ran very smoothly. Please visit our web site letstalkaboutwater.com and maybe you can host LTAW in your community! Let’s make water the Sustainable Development Goal #1! Thanks again to Stockholm Water Week! 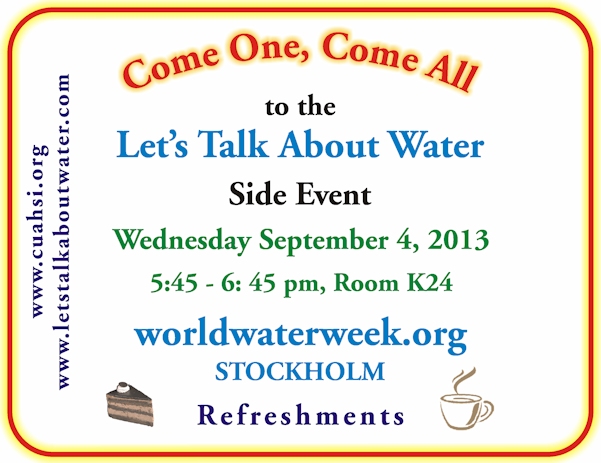 A. DIY or Help from Us

B. Where are you on the Global Threats Map (GTM) – Add your Story

Let’s Talk About Water, a film and water seminar, uses film and panelists to trigger dialogue across geographical boundaries, silos, and politics. Films can build bridges to further cooperation and understanding of complex water issues. This side event will show short clips of various water films to spark debate. 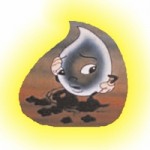 The moderator, Linda Lilienfeld, a film researcher for 35 years in science and history, will discuss the process of the Let’s Talk About Water event with Dr. Richard Hooper, Executive Director of CUAHSI. Language used in the water sector in policy, science and academia is often hard to understand. To “facilitate cooperation and build partnerships” we need to become comfortable with one another and work towards a verbal understanding, person-to-person. Films about water can be a catalyst for that process. We have conducted these events in universities across the U.S. and at the World Water Forum, Marseilles 2012, and are creating a database of these films. With the water crisis growing more urgent, clearer communication about the water issues and solutions is necessary.