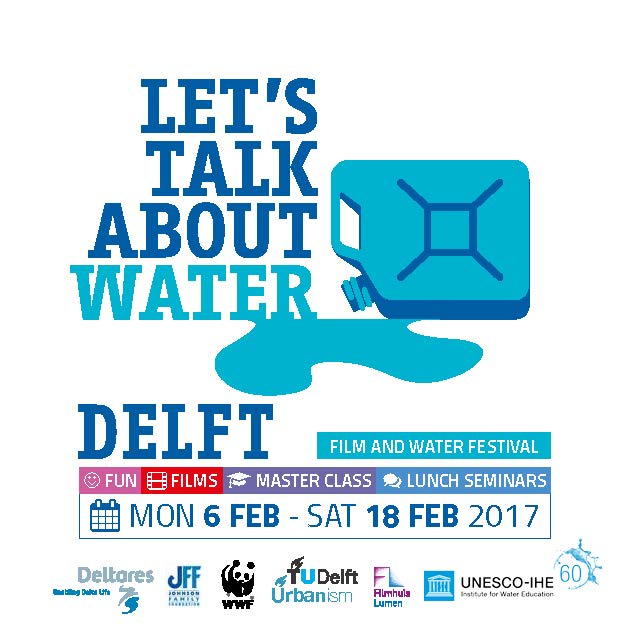 Welcome to the fifth Let’s Talk About Water, the film and water festival in Delft. We use the power of cinema to inform and to spark debate on a wide variety of topics that are connected through water. This year we add two days in Amsterdam in cooperation with AMS Institute, with an academic program and films in De Balie.

This year’s theme is Water and Power. There are many ways to interpret the word ‘power’ as played out in the films we are showing. Where water is a valuable commodity, control over water plays a role in events and communities. Knowledge and communication can empower people (and countries) against controlling forces. Oil used to be a reason to fight a war, but water will probably make us fight in the future. And in war, facts and the access to useful, true information are often the first casualties.

In the very personal story of our first film, Wistful Wilderness, filmmaker Digna Sinke askes herself how to even make an informed decision about the little island that ‘had to be’ made into nature. Big states ‘need’ to show their power to its citizens with colossal projects like the South to North Water Transfer in China. Trans-boundary conflicts loom between nations that need to share resources and make decisions that have consequences on the other side of their borders, like the countries in the Nile Basin. The Open Water Democracy Lab at UNESCO-IHE works with journalists and others on a shared narrative in that region (communicating to prevent conflict). On Saturday 11 February we spend a fun afternoon in the Rietveld Theater with cinema, music and food on this subject, while also enjoying the European premiere of Ethiopia’s most successful film ever, Abas vs. Vegas, a love story set on the Nile.

Power mixes with money, and the other way around. Fixing and keeping our underground infrastructure up to date is difficult, because its value is not visible. A lunch seminar at UNESCO-IHE (Liquid Assets) will discuss this subject. On the same day (Valentine’s Day) we will have the official kick-off of our film week at the Student Night in Filmhuis Lumen, with a screening of Polanski’s classic Chinatown, a romantic thriller based on real events in the forties when corrupt LA officials and companies tried to wield power over and earn a lot of money from the procurement of water rights.

Instead of living our lives like everybody else, and adding to our carbon footprint, some people choose to radically change. Be it for themselves or to set an example, they stay a small minority, even though they might be living the solution to our problems. The beautiful documentary Freak Out! shows that more than a century ago some extraordinary young men and women tried it all out in the Alps – a fascinating portrait of idealism.

Another choice is to be on the frontline, like Leonardo DiCaprio in his comprehensive film Before the Flood about climate change, where he also puts some blame on scientists not communicating well.

We conclude this year’s festival on Saturday with a more activist film, How to Let Go of the World and Love All the Things Climate Can’t Change. Film maker Josh Fox does not have answers, but he’s sure that changing our attitude could tip the balance, of power and climate change and maybe more.

A film and picture researcher for 40 years, specializing in science and history, Linda Lilienfeld (director of Let’s Talk About Water) believes in the power of an image to tell a story and move people. It can electrify our conversation and help us understand our world in new ways. And we need to, because with climate change and human activity affecting the world, the lives of many people are at risk – and water knits it all together.