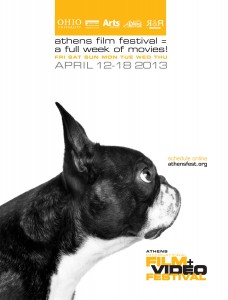 The Athena Cinema of the College of Fine Arts at Ohio University and Arts for Ohio are proud to announce the next “Science on Screen” event, a project of the Coolidge Corner Theatre and the Alfred P. Sloan Foundation. The documentary will be screened as part of the 40th Annual Athens International Film and Video Festival on Saturday, April 13, at 3:00 p.m. The event will be FREE and open to the public thanks to Arts for Ohio. [download event program, 5MB PDF]

The Athena will screen the documentary, “Chasing Ice,” which has won over 30 awards at film festivals around the world, including Sundance. National Geographic photographer, James Balog takes hauntingly beautiful pictures of our environment. 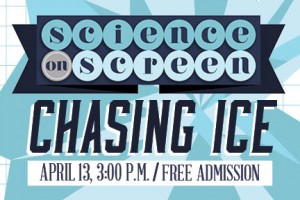 He became obsessed with melting glaciers and formed “The Extreme Ice Survey,” a project cataloguing what is really happening to the world’s changing glaciers. He tells the story of the ice through dangerous missions to subzero climates and the use of revolutionary time-lapse cameras. The cameras capture never before seen footage of these unforgiving yet beautiful parts of the earth. 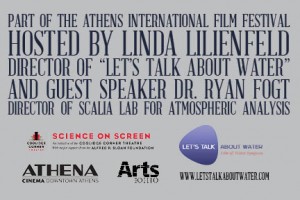 After the screening, guest presenter Linda Lilienfeld, director of the “Let’s Talk About Water” Film and Water Symposia will lead a discussion with Dr. Ryan Fogt, director of Ohio University’s Scalia Lab for Atmospheric Analysis. The two will raise questions about the correlation between glacial melting and possible connections to patterns of extreme weather and climate change.

The Athena was one of 20 non-profit cinemas nationwide selected for this prestigious program. According to the Sloan Foundation, “Science on Screen” is a “program that creatively pairs screenings of feature films and documentaries with lively presentations by scientific experts and technological innovators.” All winners “have a track record of building successful community collaborations, producing compelling film programs with an educational component, and reaching out to diverse audiences.”

For over a decade, the Sloan Foundation has partnered with leading film schools and film festivals to support and recognize screenwriters and filmmakers who explore scientific themes in their work. “Science on Screen” offers a unique opportunity to show how science and technology are woven into the fabric of modern life.