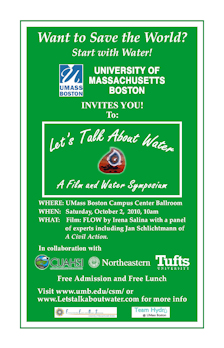 On October 2, 2010 an event was held on the campus of the University of Massachusetts, Boston. It was sponsored by the Department of Environmental, Earth and Ocean Sciences. This was our first multi-campus event with the participation of the Northeastern University and Tufts University. All three universities showed the film A Civil Action during the week leading up to the “Let’s Talk About Water” event. The film depicted a lawsuit on contaminated drinking water in Woburn, MA. The lead lawyer was Jan Schlichtmann, played by John Travolta in the movie.

At the Saturday event, over 200 participants from all three universities convened at the University of Boston campus to view the film FLOW – For Love of Water, followed by lunch (provided) and then a panel discussion to explore issues raised in both films. Mr. Schlichtmann made some remarks to open the panel discussion and then served as a panel member. Other panelists were: